We're delighted to announce that we are publishing guest writer, Nick Abalov's first article on our blog. Nick has been kind enough to share his work with us.

A colleague of mine, skyline-gleb, has recently published a post on Badoo Tech about our own Selenium-like tool for automated functional testing for Windows-based desktop applications. At the same time we were also developing a similar tool for Microsoft mobile platforms.

This article will tell you about the story behind this tool, advantages of a single automated testing platform for all mobile platforms, and about how to implement it within your projects.

Let me provide you with some background.

Right afterwards we presented our tools on Codefest 2015. We had an informal talk there with Sathish Gogineni from Badoo that developed into an idea of Winium CodedUI, implementation of a Selenium driver based on CodedUI that would support native and hybrid applications, and—last but not least—direct tests on devices.

When the project started there was only one open tool: Expensify/WindowsPhoneTestFramework. It did not suit us because it was incompatible with Selenium, had a non-standard API and was developed for BDD approach. Apart from that, it is customised to BDD. In the course of our project development Microsoft implemented their own tool called CodedUI. Again, it had its own non-standard API, was customised for coding tests in Visual Studio on C#, was closed source and not free (which is not easy to scale).

So, that was a bit of a retrospective journey. Back to Winium. Since the tools we mentioned did not suit us, we decided to make a tool of our own. That is how the Winium project was born. It started as a tool of automated testing for Windows Phone Silverlight applications and soon turned into a comprehensive set of automated testing tools for a Windows platform:

We have already discussed Winium.Desktop and Winium.Cruciatus on Habrahabr and Badoo tech blog posts. Today we will discuss Winium for Store Apps (descendant of Windows Phone Driver) and about Winium.StoreApps.CodedUi.

Main features and the limitations of the driver

Winium.StoreApps: the main driver implementation for mobile applications. We actively use and develop it in our day to day processes. The source code is open and available on GitHub.

Winium.StoreApps supports all main commands of Selenium, and it can be integrated into an existing infrastructure for testing (Selenium- or Appium-based). Generally, one can actively use it in a continuous process (that’s what we are doing).

How it all works.

Technically, Winium.StoreApps.Driver.exe is an HTTP server that implements JsonWire/WebDriver REST protocol. When necessary, Driver proxies the incoming commands to InnerServer (a test automation server) that is integrated into the application to be tested.

Interaction structure among tests, the driver and the tested app.

How to prepare an application and how to code tests.

One should follow three simple steps to launch tests against our application:

Then it would be really nice to enable testability of the app by specifying names and identifiers for the elements you are planning to use in test (this is not mandatory, however).

That’s it. The only thing you need to do now is to create an appx package with your application.

The tests are coded in the same way that web or mobile devices are with Selenium or Appium bindings.

The first thing you need to do is to create a new session. During its creation one can specify various properties. Here’s a list of basic ones that are supported by the driver (The complete list can be found on wiki).

Ok, we’ve created a session and run the app. Now we need to detect the elements if we need to interact with them. The driver supports the following locators:

In order to enable the search of locators and comprehension of UI structure of the tested app in general, we have created an inspector that can connect to the application and display the current UI state as seen by the driver. 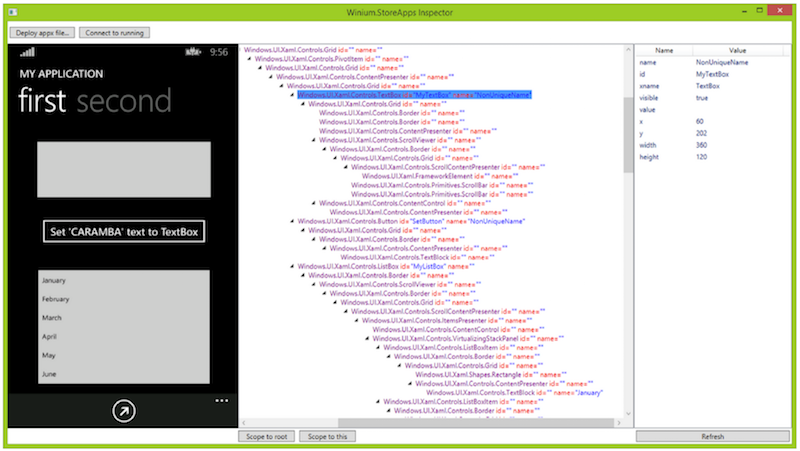 There is not much the inspector can do now, but it does provide some basics like screenshot, UI tree as seen by a driver with all known elements, locators and their basic properties, like position, visibility and text this should help to get started with writing tests.

Ok, we have found the element. Now we can fiddle with it in any way we please.

One click is not enough for a world of mobile phones. We need gestures. We are supporting the good old API from JSWP, and need to add support for a new Mobile WebDriver API soon. Feel free to make flicks and scrolls already.

Since we are integrating the automation server into the app, you will be able to do way more interesting tricks. Like calling MS Accessibility API commands:

It will let you use precise means of scrolling elements instead of gesture simulation.
Besides, one can assign a value to a public property, though we do not recommend you do that in tests:

However, there are situations when this is justified. In our tests, for instance, we use this API instead of moving a map by gestures to move it precisely into the required position.
This list of commands that are supported by the driver is far from being complete. The more detailed list and notes on commands can be found in wiki.
Let us create a simple test based on all these commands:
A code for a simple test

We create a new session for this example. We hide the screen keyboard (both for a demonstration and to get it out of the way).

We switch to the second tab in the pivot element. We find an input field and start typing. Then we select one of the suggestions in the list and check if the value in the input field is the same as the prompt value. Then we close the session.

Now you need to do the easiest part. Run Winium.StoreApps.Driver.exe (you can download this one from GitHub), run the tests by our favourite test runner and enjoy the magic.

Main features and limitations of the driver.
The idea of creating a prototype for a Selenium driver that would wrap CodedUI came into our heads after Codefest 2015. We brought it to life, and the result is currently available on GitHub.

How it all works

It all operates based on the same principles as in StoreApps, but now instead of integrating a server into the app we launch the server as a separate background process via vs.test.console and CodedUI. This test server has got access to device and UI of the running applications directly via Accessibility API (in order to search for elements, for example) and via CodedUI API (for gestures, etc.).

Interaction structure among tests, the driver and the tested app.

How to prepare an application and how to code tests

Since this approach does not require amendments to the tested application, one can test both released app versions and pre-installed apps. That means that this version of the driver is as close as it can be to Appium philosophy. This is an advantage and a disadvantage at once, because it applies access restrictions to some internal parts of the app.

No particular app preparation is required. The tests are coded and run in the same manner as they are done for Winium.StoreApps.

This is a demo video where we automate creation of an event in a standard and pre-installed Calendar app.
Example code

How does Winium help us?

Is there an advantage of creating this tool instead of using platform-specific ones?

All our mobile app teams are using unified tools now. It lets us share experiences, build a single toolkit and infrastructure to launch our tests and not to disperse our attention to different platforms. Notably, one skilled engineer has successfully switched from iOS automation to Windows Phone, shared her experience and instructed our test engineers, which has significantly raised the project level.

In the context of infrastructure, it allowed us to focus on creating one tool (vmmaster) which would provide a reproducible test environment on demand. Well, it is a good subject for a new article.

The main thing is it gave us a possibility to start uniting our tests for various platforms in a single project (demo).

All of this is open source, of course, so feel free to use these tools to automate tests for Windows Phone apps. By the way, Winium.StoreApps is absolutely free. In order to use it you need to download the recent release and install emulators or a Visual Studio Community with a mobile SDK. Still, to use Winium.CodedUi you will need a paid version of Visual Studio Premium or higher.
And again: a link to repository and other open source 2GIS products.