Our Bounty Program at Badoo

Many IT companies now have their own bounty programs (i.e. programs that root out vulnerabilities), and Badoo is no exception. 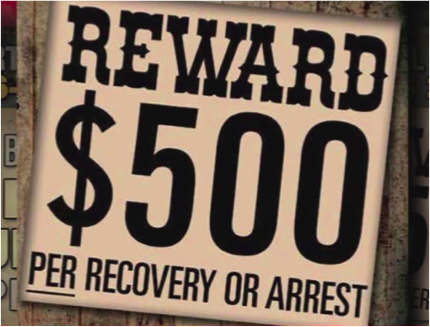 In this article, we'll discuss how we launched and support our bounty program without a dedicated information security division. We'll discuss some of the problems we've encounted, how we solved them, and how we ended up with the program we use today. And, of course, we'll recall some of the more interesting bugs that program participants have let us know about.

The bounty program has been running for three years, and participants from all over the world continue to report bugs to us.

We'd like to draw even more interest from foreign investigators, so we've opened our own page on the largest hacker portal hackerone.com, and increased the reward for finding vulnerabilites! Depending on the category, rewards range from £100 to £1000, and grand prize rewards are now £2000. The upper cap on rewards can go even higher if one finds a vulnerability that presents a real threat to our users.

Badoo is one of the foremost social networking services in the world. Through Badoo, you can meet your better half, start up new friendships, or just find someone nearby to chat with.

Currently, Badoo has over 300 million registered users that speak more than 50 languages and live around the world. Our work is supported by around 3000 servers located in four data centers (in America, Europe, Asia, and Russia). We offer an assortment of apps for all popular mobile platforms, the mobile web, and web versions for desktop browsers. We are a highload project; at peak traffic we handle 70-80 thousand requests per second.

Given the scale of our project, our time and resources are understandably spread in many different directions, only one of which being information security. 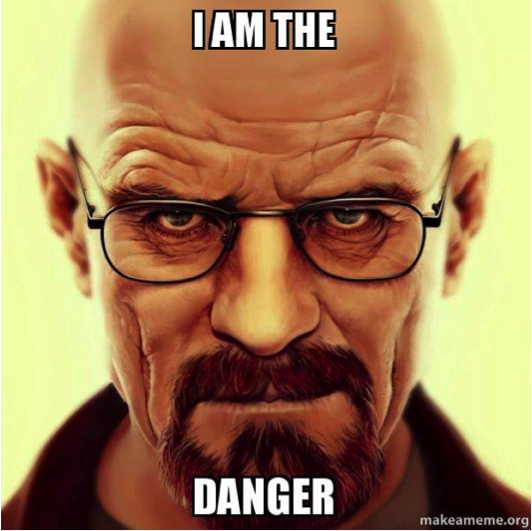 It might strike some as strange then that we have no information security division or any specialists that handle our security issues exclusively.

Nevertheless, our users are very dear to us and we care about the security of their data. Despite the fact that we don't support the features that a bank does, such as an online payment system, or a way to withdraw funds (although we do have a system for receiving our internal «Badoo credit» currency), we still have a lot of data that needs to be protected.

To further complicate the matter, we adhere to the standard business wisdom that any security efforts shouldn't impinge on the customer's ease of use. For example, we have a feature that allows users to access their account directly from an email link, without having to re-enter their username and password. From a data security point of view, this is risky, however we take all necessary precautions and employ mechanisms to protect user data in such cases. But, of course, no system is perfect.

It's difficult to answer the question «Why don't you have a dedicated security division?», but we'd ask that you keep in mind that our project grew from a small start-up. And any start-up is initially focused on developing quickly and reaching certain business goals, rather than focusing primarily on things like quality, security, and other areas that are the realm of mature projects. For this reason, the majority of startups don't get off the ground thinking about their testing division, and put off thoughts of an information security division till even later. This is to be expected.

At our company, we still employ certain methods and approaches that are more characteristic of a startup. Though we've dealt with information security from the very beginning (and our guys are consummate pros), we haven’t had a systematic approach to the issue. The day will almost certainly come when we will either employ dedicated specialists or create an entire information security division.

But for now, these are the security measures we take in addition to supporting the bounty program:

Third-party security specialists have also helped us a lot. Some of them we reached out to, others reported bugs to us on their own volition and were rewarded for it. But the process itself hasn't proceeded in an organized fashion, so we've decided to systematize it.

We first started to seriously consider having a permanent bounty program a few years ago, motivated on one hand by the challenge and its potential to propel us to a new level and, on the other hand, by the fact that this could help us figure out where we stand as far as security goes.

It goes without saying that we didn't start by immediately trying to launch the program, but rather by running a few internal checks to ensure us that we were ready for the next steps.

In the corporate site's interface, we put together a page listing reports along with their statuses and categories. Descriptions of vulnerabilities were shown only after they'd been fixed. New reports could also be sent in through this page. 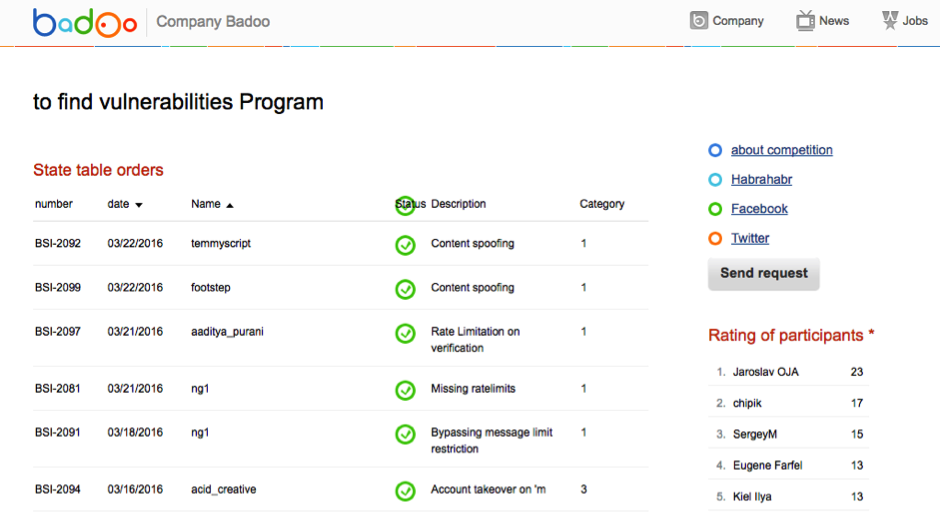 This format was very convenient: participants got an email from us with their report number and could track it in the list. They could also share the link to the page with others, raising their own karma.

For additional motivation, we created a participant rating system which was based not only on the number of reports from a given person, but also how critical they were. At the end of the month, we rewarded the leaders with special prizes.

This page also helped us point out duplicate entries. If a participant submitted a duplicate report, they got a notification containing the number of the report that had already been accepted. As a result, they could then track the status of that report. 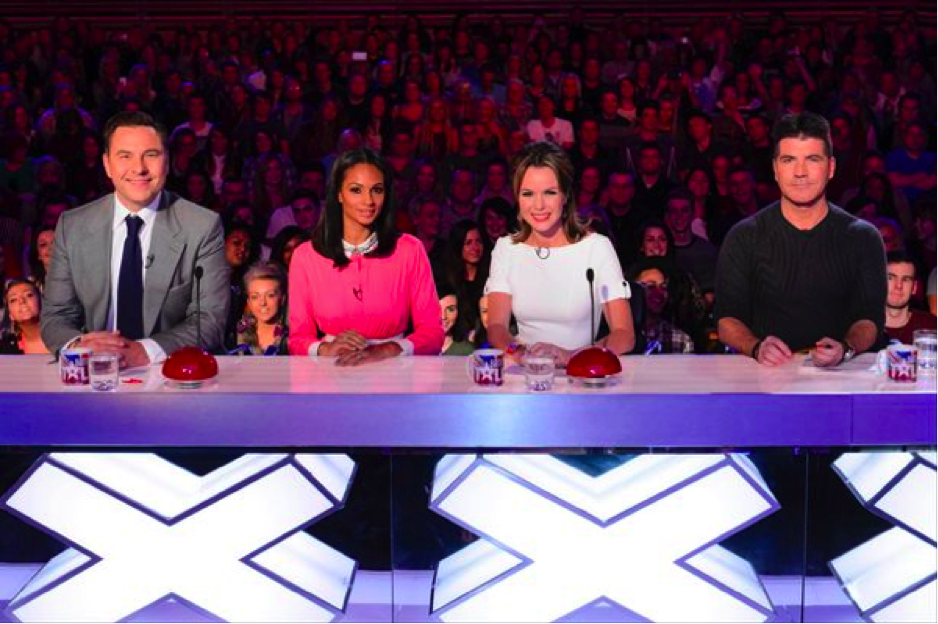 As far as rating the bugs found by participants, we decided not to use any of the widely-used systems of vulnerability assessment like OWASP. To the contrary, we assigned categories based on the potential harm that a given vulnerability might inflict on our users. In total, we created five categories and standard rewards ranged from 50 – 500 pounds sterling.

At first glance, this may seem like a strange approach, but some of the less critical vulnerabilities according to OWASP www.owasp.org could inflict the most harm on our users, so they needed to be ranked higher. To this effect, we even offered super-rewards of £2000 or more for discovering especially critical vulnerabilities. We decided to also encourage our investigators to think of the most effective vector of attack (rather than just pointing out the error’s existence). Further on in this article, we'll give an example of a simple XSS-vulnerability that we paid a super-reward for because of the unusual and particularly interesting method of attack the participant indicated.

Thus, D-Day was underway. We launched the program, announced it via several sources, and sat back waiting for the results. Keep in mind that this program was only in effect for a month. It was a stressful, but very productive time for us. Here are the results of «security month» at Badoo: 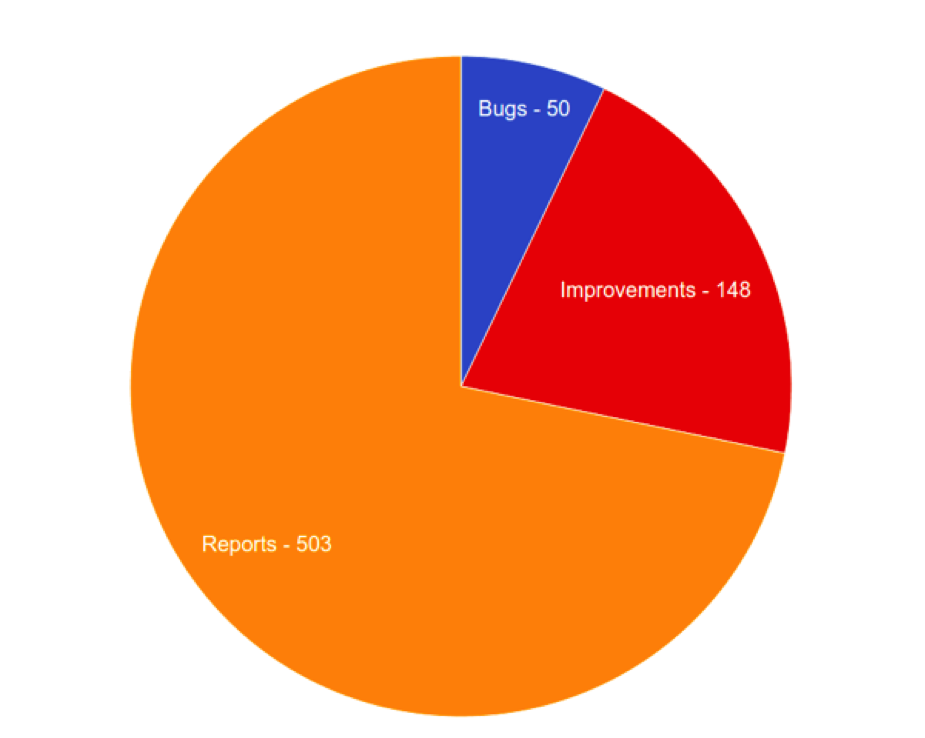 The majority of bugs reported over the course of several days were CSRF. Pages where users fill in information about themselves, upload photos, etc. were the most impacted. It’s not as if we had no defense against CSRF attacks at that time though. Indeed, many of our pages were protected using session tokens. Nevertheless, it turned out that not all user actions on the site were protected from CSRF threats.

We responded quickly and launched a major project to defend user data against CSRF in the course of a few days. All pages and web services were redone to check CSRF tokens by default. This way, we got rid of practically all CSRF vulnerabilities on our site. 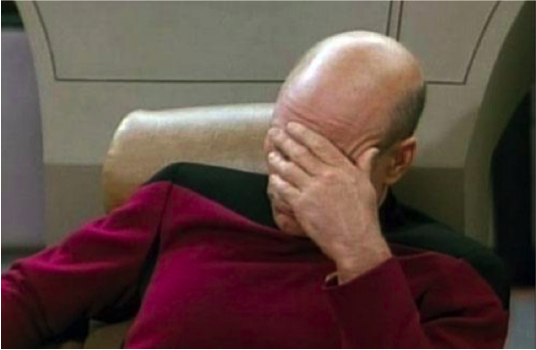 The top three most embarrassing bugs that we discovered during Security Month were the following:

During the contest, we learned to respond quickly to participant reports (within a few hours), fix the bugs, and create a separate project dedicated to defense against CSRF-attacks. It was clear that this program was important and essential. The time and resources spent preparing for and implementing it were more than justified. So we decided to take things further and began preparing for a permanent security vulnerability search program. First we just needed to change the format a bit.

During the contest month, we learned how a convenient report processing flow should look and decided to switch it over to JIRA (all our company's tasks are handled using this system).

The simple flow in Google Groups looked like this:

Participant reports came to us from one of two paths: either via the form on the corporate site or via the special email address. The contest jury carefully evaluated reports and, in the case of real threats, sent them to specific teams to be dealt with. Our developer relations manager helped us handle communications with participants at this stage, although many of the emails could have been generated automatically.

The flow in Jira, which we put together for the permanent program, looks a bit different and allows for automated answers to be sent to participants.

We also decided to add mobile apps to the permanent program.

Around this time we ended up on the Bugcrowd bounty list, which upped our popularity and helped draw the attention of investigators from all over the world. Having made our big appearance, we proceeded to launch the program.

Results of the permanent program

Unfortunately, results of the permanent program haven’t proved to be quite as impressive as the contest month’s, as we receive more irrelevant vulnerability reports than we did before. Nevertheless, we were tipped off to several interesting bugs during the first year of the «big» program. 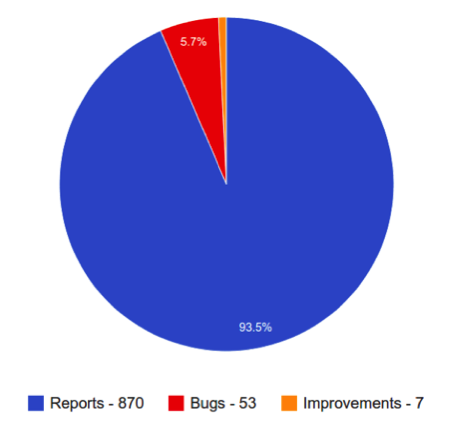 As we expected, our program generated a lot of buzz, and the number of useful reports we received was not insignificant, so all in all, we are satisfied with the results.

Many of the interesting bugs found during the first year concerned our mobile apps. We were, of course, grateful to find out about them, as this area is new territory for developers and hackers alike.

Here are the top three bugs found during the first year of the program:

All in all, we feel that the program has proved very rewarding and effective. We get expert feedback on our apps and sites every day from hackers all over the world and work to improve our services based on the latest findings in the field of information security. We value the trust of our users and aim to do everything we can to protect their information.

We'd love for you to participate in our program and apply your skills to seeking out bugs on the sites and apps of other companies. The process itself is often very entertaining and you will not only come away from it with newly-acquired knowledge, but also some extra cash. We pay in pounds sterling and recently increased the prize amount substantially.

The best way to send us bug or vulnerability reports is through the Hackerone platform. Happy bug hunting!

P.S: While we were writing this article, Hackerone let us know about more interesting vulnerabilities, which we’ll let you know about in a later post. 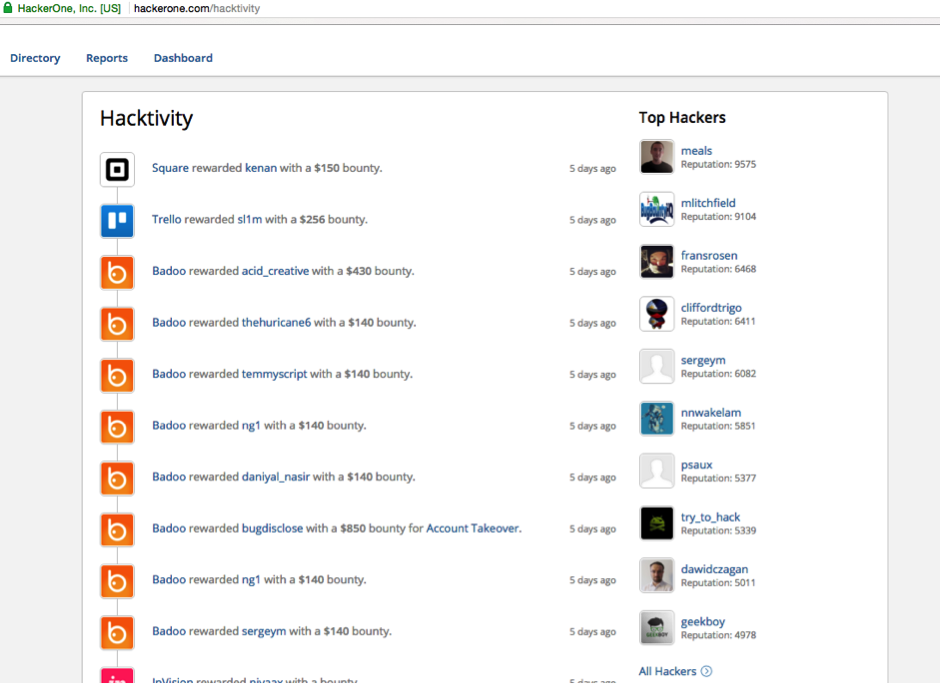