rajdeep varma 14 Dec 2016
At Badoo, we use Calabash for automated Android application testing. One of our goal is to make it super easy for developers to run these tests in one command without going through the pain of setting up a test-scripting environment (Installing JDK, Android SDK, Ruby, and praying that nothing else has been added since the documentation was written). The two obvious choices were Vagrant and Docker. Speed of execution was one of the main criteria for us, so we ended up choosing Docker.

Most of the people in our team use Mac laptops and setting up Docker with Calabash-Android on Mac is not straightforward. In this article I will share with you the problems we had and the solutions we implemented.

Docker for Mac is built on top of xhyve, one of the derivatives of the OS X Hypervisor.Framework, but it does not support USB. This is immediately a problem, because the Android Debug Bridge (ADB) needs the USB system to detect and communicate with phones.

Running ADB starts a server which manages the Android devices, but that server normally runs on the same machine. Instead, we start the ADB server on the Mac (which can see the USB system), and let the ADB client inside the Docker container talk to it through a proxy.

While there are many ways to run the ADB server on the Mac host and connect to it from inside the container, I found this existing Java utility does it in a simple way: https://bitbucket.org/chabernac/adbportforward

There are no downsides to this approach, since Android developers will have ADB installed on their Macs already.

This routes all calls made at localhost:xxxx of the Mac to the http server running on port ‘yyyy’ inside the Android device.

But this does not work for two reasons: 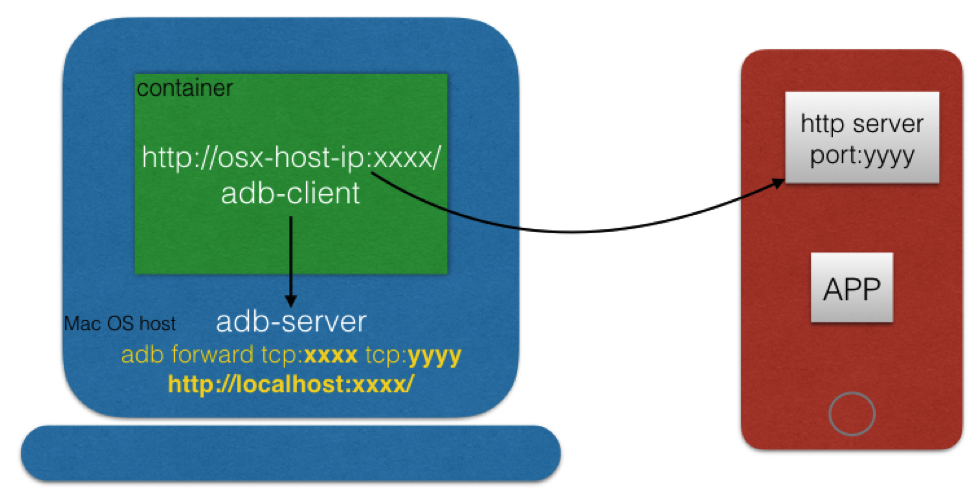 We can forward any traffic for a network interface to the localhost interface. This means any calls to http:// osx_host_ip:xxxx/ will be redirected to http:// localhost:xxxx/

We use this script snippet:


2) This is how entrypoint.sh looks:

While the exercise was to deliver the automated tests as a fully self-contained solution I compromised with a small dependency of having ‘ADB’ installed locally, but as mentioned, all Android developers have ADB locally. In the end, the results were great and our developers started using tests to reproduce bugs and to create complex test data. This certainly enhanced the importance of automation at Badoo.

That’s pretty much it! If you have any questions or suggestions, feel free to drop them below.
Share this article
More on topic