Breaking the limitation of Calabash-Android!

Two of the most popular drivers for Android app automation are Appium and Calabash. While both have their pros and cons, their major limitations are:

We have been using Calabash for automated testing at Badoo since before Appium existed. The stability of Calabash is great and it’s still faster compared to Appium, so we don’t want to migrate. But, to automate a feature-rich application like Badoo, we had to overcome the ‘only application UI’ limitation of Calabash.

In the past, we had a solution which is blogged here. While this solution works, there was some degree of flakiness due to device dynamics (screen size, Android OS variant etc.).

In this article, I will describe how I solved the problem mentioned above by adding UiAutomator2 support to Calabash. If you can’t wait, there is a link to a ready-to-use Ruby Gem at the end.

Let’s have a look at the high-level architecture of Calabash-Android: 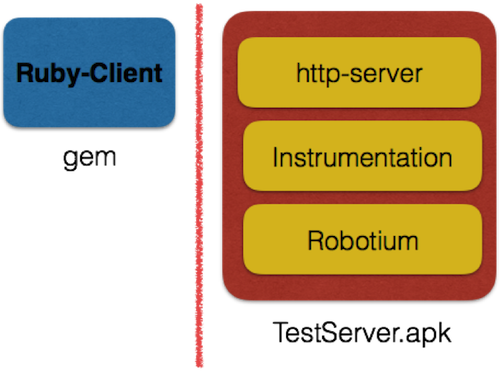 With the release of UIAutomator 2.0, Google made it part of the Instrumentation. This opens up the possibility of using it inside the Calabash-Android server.

With UIAutomator 2.0, the same instrumentation object can be used to create a new UiDevice object which can drive the whole device. 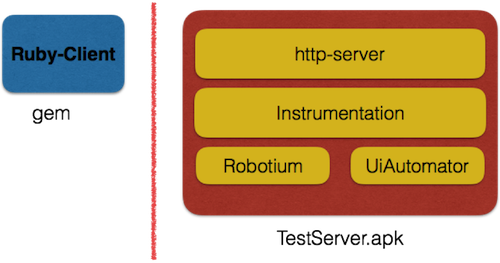 Here is how I approached the solution:

Adding a new command to the Calabash-android-server is pretty easy. All commands that you can use in your Ruby code are mapped to the Actions Interface: sh.calaba.instrumentationbackend.actions

In the above example, the method key() is used to name the command to be used by the Calabash Ruby client. When this command is invoked by the Ruby client, its execute() method will be triggered.

Clone ruby client from https://github.com/calabash/calabash-android. Patch lib/calabash-android/operations.rb to add the ‘-w’ flag while starting instrumentation using the ADB command. Please refer to this commit on how to do it.

To see an example of the above steps you can have a look at my fork:

A Ready to use Ruby-Gem:

If you do not want to do the above stuff yourself, you can download the gem here and just follow the last three points.

It took me some effort to dig into the Calabash-Android-Server code to find out how it works and to explore the possibility of this being achievable. Things did not work out on the first attempt but in the process, I got to know some of Android Instrumentation’s secrets. I will share them some other day.

While the example I shared is about the automation of push notifications using Calabash, this approach can be applied to any problem you face in automation frameworks based on Calabash, such as:

I hope this will help you to test those cases of your Android app which go out the app’s UI using Calabash. If you have any questions or feedback, please feel free to leave a comment below.